Online voting applications can be very useful, but most suffer from a lack of transparency, which makes them an ideal candidate for the blockchain. This is especially true if you are using them for casual polling of customers or getting public opinion on a specific topic. If the stakes of a vote are more consequential, this presents a problem for blockchain application builders. Public blockchain applications have some basic anonymity, and with that, several challenges need to be addressed. The most prominent issue is double voting. How do you prevent an individual from creating multiple accounts and voting more than once? What is needed is a permissioned voting application. Permissioned voting applications should only allow one individual to vote once. This walkthrough explains one method of doing this on the Algorand blockchain.

This application will involve using many of the Algorand technologies, including stateless smart contracts, atomic transfers, standard assets, and asset transactions. This article will begin with a design overview and then go into the details on how to build the application on Algorand.

To implement a permissioned voting application on Algorand, a central authority is needed to provide users the right to vote. In this example, this is handled by an Algorand Standard Asset. The central authority creates a vote token and then gives voters who have registered one voting token. The voter then registers within a round range with the voting smart contract, by optioning into the contract. Voters then vote by grouping two transactions. The first is a smart contract call to vote for either candidate A or candidate B, and the second is transferring the vote token back to the central authority. Voting is only allowed within the voting range.

To create this type of application on Algorand, there are four steps that must be supported. 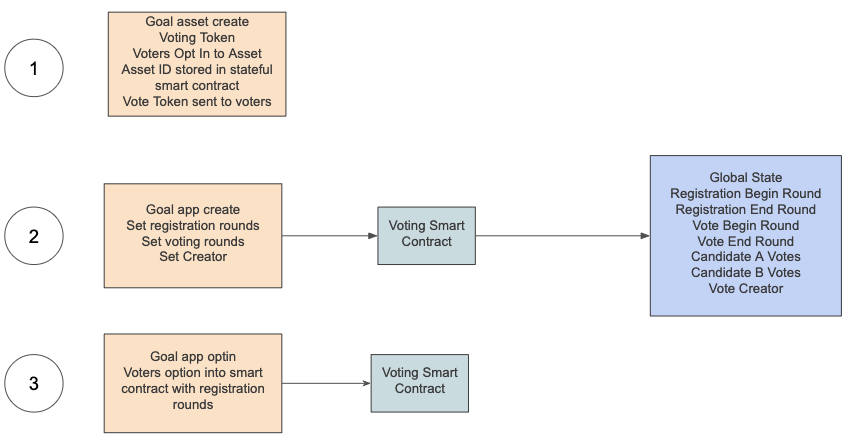 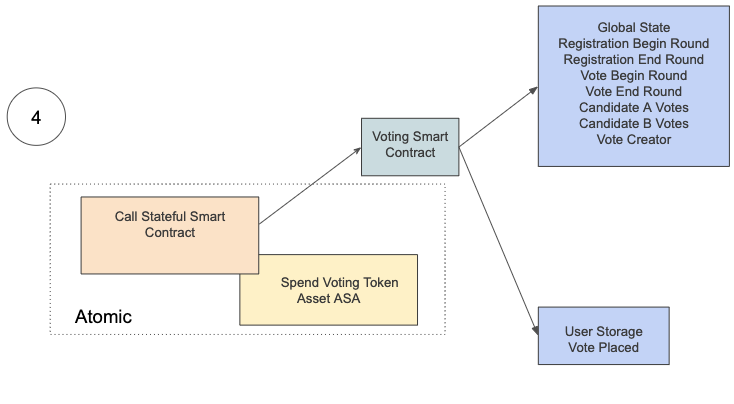 Each step in this architecture is explained in the following sections.

This solution solely makes use of goal to make the application calls against the stateful application. The SDKs also provide the same functionality and can be used instead of goal.

The central authority first needs to create a voting token. This can be done with the SDKs, the goal command-line tool, or using an asset creation IDE like algodesk.io.

Below is an example of creating a voting token using goal.

In this example, 1000 vote tokens are created. Voters then need to opt into the voting token.

The assetID for the voting token should be hardcoded into the voting smart contract. Optionally it could be passed in as an argument. The assetID is discussed more in step 4.

Seven global variables ( one byte slice and six integers) and one local storage variable (byte) are used in the voting application. The global byte slice is for the creator address and the six global integers represent the round ranges for registering and voting. The local byte slice is used to store the vote for a specific account, i.e. candidate A or candidate B.

The TEAL code for the stateful smart contract performs the following operations.

Users must opt into stateful smart contracts if the contract uses local storage. This application stores a voter’s choice in local storage and requires that users opt-in.

Opting in is done using goal or the SDKs.

The voting app uses an application argument with the value of “register” to perform the opt in operation. The smart contract executes the following actions.

For more information on opting into a stateful smart contract see the developer documentation.

Once registered with the smart contract, users can vote. This requires using an atomic transfer with two transactions. The first should be a call to the stateful smart contract casting a vote, and the second should be an asset transfer (voting token) from the voter to the central authority. 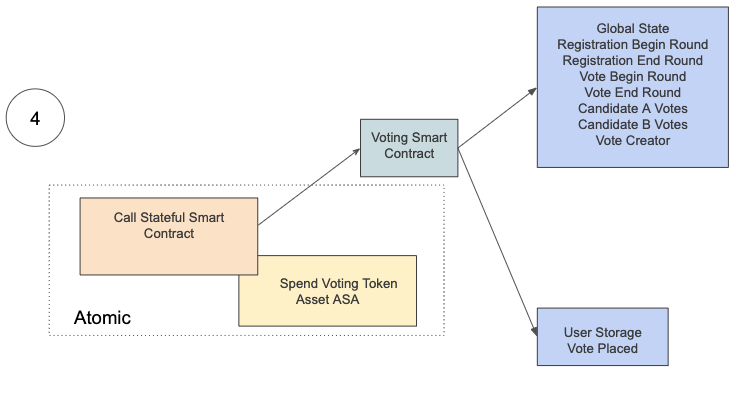 The atomic transfer in this example, is done with the goal command-line tool.

The smart contract processes this request with the following operations.

The permissioned-voting application illustrates using several of Algorand’s layer-1 features to implement a functional smart contract. The full source code for the application is available on Github.