An Algorand Standard Asset, ASA for short, is a layer 1 feature that allows users to represent any asset on the Algorand blockchain, in turn benefiting from the same level of security and ease of use as the native Algo. Detailed documentation about this feature is available on Algorand’s developer website here.

In this post we will draw out some of the most important concepts for developers who plan to work with ASAs. We will list some of the many examples of real-world assets that users can represent with this feature on the Algorand blockchain. Then we will share an example scenario paired with an interactive task to get you started with this new feature on TestNet.

There are three new types of transactions on Algorand to support ASA-related functions, namely 1) AssetConfigTxn (‘acfg’), 2) AssetFreezeTxn (‘afrz’), and 3) AssetTransferTxn (‘axfer’). Those three types paired with different parameter specifications support seven primary user flows, namely: 1) Asset Creation, 2) Asset (re-)Configuration, 3) Asset Freezing, 4) Asset Destruction, 5) Asset Transfer, 6) Asset Revocation and 7) Asset Opt-In. Note that goal and the SDKs include wrappers for most of these user flows. See diagram below for the key differences between these user flows with respect to their underlying constructs. 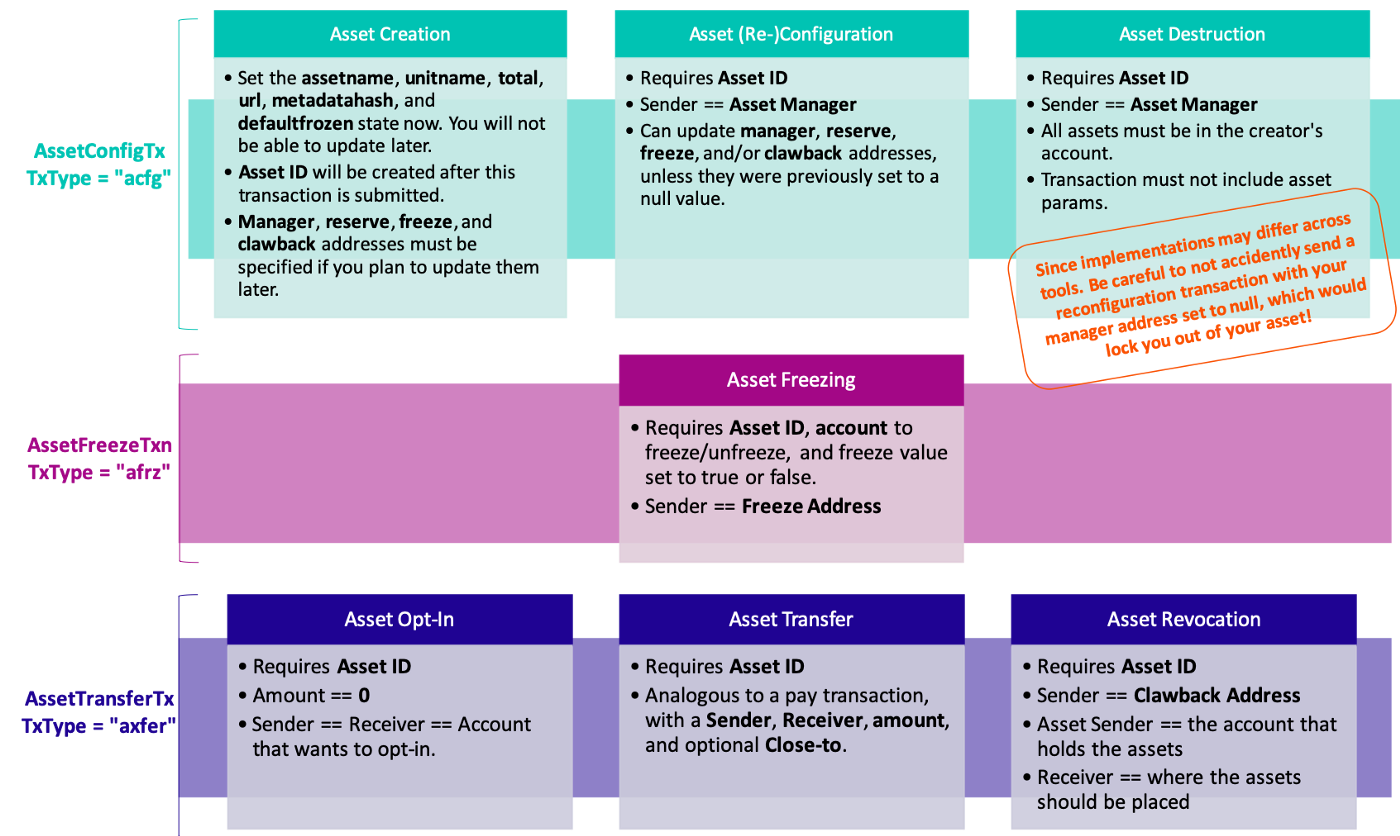 To receive a new type of asset, an account must opt-in, which is the equivalent of the account sending a 0-amount transfer of the desired asset from and to itself. This will create a holding in that user’s account for that new asset, which gives others who own that asset the ability to transfer it to this user.

The clawback address, if specified, is able to revoke the asset from any account and place them in any other account that has previously opted-in. This may be useful in situations where a holder of the asset breaches some set of terms that you established for that asset. You could issue a freeze transaction to investigate, and if you determine that they can no longer own the asset, you could revoke the assets. Similar to freezing, if you would rather ensure to asset holders that you will never have the ability to revoke assets, set the clawback address to null.

With Algorand Standard Assets you can represent fungible and non-fungible assets and with varying degrees of control. Here is a small subset of what could be represented on layer 1 of the Algorand blockchain with ASAs:

Get started with Algorand Standard Assets, by opting-in to receive an ASA we created on the Algorand TestNet called Algorand Developer Coins. See the full task on our forums here.