Use both contract types when your dApp combines application logic and user state with the handling of funds or assets. Examples include

Algorand currently has two types of layer-1 smart contracts, stateful and stateless. When building applications on the Algorand Blockchain, these two contracts perform very different functions. While each of these functions working stand-alone allow developers to build some amazing applications, often it is required that these two types of contracts work in conjunction to solve some type of problem. This type of problem generally occurs when you want to store some persistent data about a user or some global data in conjunction with performing some type of spending transaction. For example, with a crowdfunding application, when users donate (spending transaction) to a fund, you also want to increment a fund total. You may also want to store how much an individual gave; in case you need to return the funds to the user at a later date. This article will cover the basic concept of linking the two types of smart contracts within your applications to make this possible.

Before getting into combining the two types of contracts, a brief overview of each type of contract is in order or if you are already familiar with Algorand contract types, skip ahead to an example of linking contracts.

The second way stateless smart contracts can be used to sign a transaction is by using them in a delegated manner. This simply means a stateless smart contract is written and an individual or multi-signature account signs the logic . This signed logic can then be used at a later date to submit a transaction on behalf of the account or multi-signature account to retrieve either Algos or Assets from the original signing account(s). The logic is checked once the transaction is submitted. For example, you may sign logic that says your mortgage company can take X Algos from your account once a month. The mortgage company could then submit a transaction once a month, where your account is the “from” attribute of the transaction and sign that transaction with the previously signed logic. This signed logic, is referred to as an Algorand LogicSig and may be persisted or kept in memory of an application. It is often wise to expire the LogicSig by putting a maximum round in which they can be used in the smart contract code. Many additional checks should be used here as well, including transaction fee, the recipient’s address, verify no Rekeying is occurring, etc. See the developer documentation for more details on critical checks within the smart contract logic. 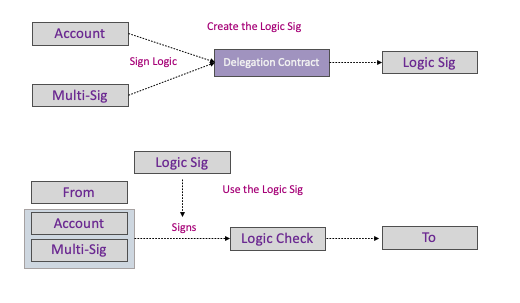 The TEAL code to implement this type of check may look something like the following.

This will effectively link both contracts and fail either if the other is not present when the transactions are submitted.