Go to the Code

Exchanging digital goods in a decentralized way, with no centralized authority, is one of the key promises of blockchain technology. Digital exchanges and blockchains realize the fulfillment of this promise in different ways. For high frequency exchanges, much of the work is done in layer-2 applications where transactions are finalized on the blockchain. For lower frequency exchanges, most of the work is done directly on the chain. On Algorand a digital exchange can be implemented in many ways. This solution illustrates one of those ways where all orders are stored and fulfilled on the blockchain. This article is meant to be more instructive, to help developers understand the key concepts of various Algorand technology pieces and as such it is fairly simplistic in operation.

In this solution, we will illustrate how to connect buyers and sellers and facilitate exchange of assets in a decentralized fashion on the Algorand blockchain. We will use limit order contracts as the method of exchange, where a buyer opens an order and specifies the asset they want to purchase and at what exchange rate. This order then resides on the blockchain where any seller of the asset can fulfill the order at a later time. The solution also offers the ability for the buyer to close the order at any time.

This example uses hardcoded addresses for a user opening an order and a user to execute the order. The example also uses hardcoded connections to Algorand’s TestNet and Indexer. This is done to simplify the example but ideally the application would use AlgoSigner for managing accounts and connect to the node the application deployer uses or to one of the API services available.

The solution allows a buyer to create a limit order where they specify what Algorand Asset they are interested in purchasing. The order should also contain a minimum and maximum amount of micro Algos they are willing to spend and an exchange rate. In the solution we use a simple ‘N’ and ‘D’ notation to represent this exchange rate. Where ‘N’ represents the ammount of the Asset and ‘D’ is the micoAlgos they are willing to spend. Once entered, the user can place the order.

The order is converted into a stateless contract that is used for delegated authority. Stateless contracts can be used either as escrows or delegation. With an Escrow the funds are moved to an account where the logic determines when they leave. With delegation, the logic is signed by a user and this logic can be used later to remove funds from the signers account. Either could have been used in this example. This solution implemented delegation, where the logic is signed by the user listing the order. This is referred to as creating a logic signature. This logic signature is then saved to a file that is pushed to the server for later use. The signed logic is deleted when the user closes the order or the order is executed.

Once an order has been placed, the solution provides a list box and a refresh orders button. Once clicked, the web application calls the Algorand Indexer to search all accounts that have opted into the stateful smart contract. These accounts are iterated over and their local storage values (open orders) are read back and populated into the list box.

Once the open orders are listed, another user can login to the web application, select an open order and execute it. The executing user can specify how many of the assets they are selling and how much micro Algos they are requesting. If they specify more than the original limit order’s maximum or less than the original minimum, the execution will fail. If they specify an exchange rate that is less than the original limit order specified, the execution will also fail. Once the executing user presses the execute order button, the web application will generate three transactions. The first is a call to the stateful smart contract specifying they are executing the specific order. The second is a payment transaction from the limit order lister to the execution user in the specified amount of micro Algos. The third transaction is an asset transfer from the execution user to the limit order lister’s account transferring the specified asset amount. The first and third transactions are signed by the execution user. The second transaction (payment) is signed with the stateless smart contract logic that the listing user signed earlier when opening the order. This logic signature is read from the file that was uploaded to the server. These three transactions are grouped atomically and pushed to the server. With atomic transactions, if any transaction fails they all fail. This results is both parties getting what they were expecting.

The stateful smart contract in the first transaction will clear the order from the listing user’s local state and the signed logic file is then deleted from the server.

This Application uses the JavaScript SDK to implement all calls to the Algorand node and Indexer.

The first step involves opening an order where a user specifies a set of criteria for a limit order.

The required data includes the asset ID of the asset they are interested in acquiring, the minimum and maximum micro Algos they are willing to spend, and a N and D value. These two values together equate to the exchange rate of N/D. So for every N amount of the asset they are willing to spend D micro Algos. When the Place Order button is pressed, the web app code generates a delegate stateless smart contract using a basic TEAL template string that is shown below.

Assets must be opted into before they can be traded. This application does not handle this operation.

This contract code does the following checks.

The values entered in the web app are substituted into the contract. This code is then compiled. An order number is generated using the entry values supplied by the user. This compiled logic is then signed by the user placing the order. This signed logic (logic signature) is uploaded to the server for later use. The web application then calls the stateful smart contract application to open the order, supplying the order number which is stored in the user’s local state. The portion of the stateful smart contract code for opening the order is shown below.

Instead of using delegation here, an escrow could be created using the same logic but the maximum funds would need to be transferred to it at this time.

This logic does the following checks.

Once an order is placed, other users can see the order by clicking on the Refresh Orders button. This same function could also be placed on a timed interval but for simplicity the solution does not implement this feature. The order numbers are just the concatenated values specified when the order was opened. 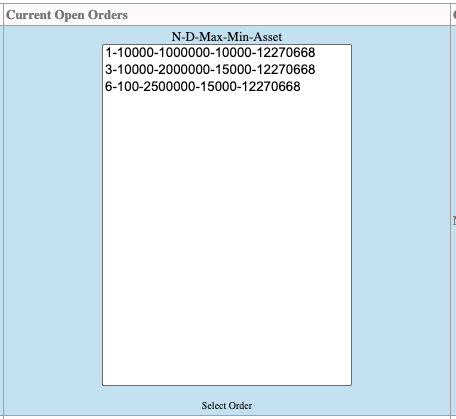 The JavaScript SDK is used to connect to the Indexer and search for all accounts that have opted into the stateful smart contract. These accounts are iterated and their local state is examined to find currently opened orders. Within the source files, additional code is provided to simplify this section of code so that it relies only on the Indexer. This additional code is commented out as a current indexer bug prevents it from working. This issue should be resolved soon and the code can be exchanged with the simpler implementation.

A user executes an order by selecting the order from the open orders list. This will populate a few entry boxes specifying the asset being exchanged, the quantity of that asset and how many micro Algos the user executing the limit order will receive. These boxes are populated with the initial correct exchange rate but the user can alter these to sell more assets as long as the exchange rate is at least as favorable to the order lister as the initial rate and the minimum and maximum micro Algos limits are respected. If any of these conditions are violated the execution will fail due to a logic error. This logic is in the stateless smart contract that the listing user signed when the order was placed. 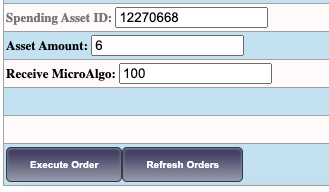 Once the transactions succeed, the signed stateless contract is deleted from the server.

The portion of the stateful contract that handles the order execution is shown below. This code performs the following checks.

The original listing user of an order can at any time select the placed order from the open orders list and press the Close Order button to cancel the order. The web application will trigger a stateful smart contract call passing two parameters, the string “close” and the order number. The stateful contract will then delete that order number from the local state of the user and the web app will then delete the previous signed stateless contract from the server.

The portion of the stateful smart contract that handles the close operation is shown below. The code performs the following checks.

The application has very little error checking and is meant as a learning exercise. Additional error checking and handling should be done before using this logic in a production application. For example, the order numbers are generated based solely on what values are used in the limit order. In the web application, this is prepended with the users address but the listing box and the stateful teal application remove this prepending. This will allow duplicate order numbers from two different users. While this does not cause issues, it can be seen as confusing. Additionally, the logic signature is uploaded unencrypted and while this should not matter it is probably good practice to make this secure.

The application also uses hardcoded addresses for two fictitious users, which should be changed to allow integration with AlgoSigner.

The simple DEX application illustrates using several of Algorand’s layer-1 features to implement a functional smart contract application. The full source code for the application is available on Github. Make sure to see the readme for instructions on setup and running the application.